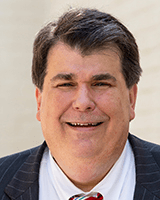 Alan’s personal role model is St. Ignatius of Loyola, founder of the Jesuits, who taught that, because God can be found in our everyday work, all work is important. That’s why he listens so carefully to his clients and takes their concerns to heart.

Founder of the firm, he is our Team Leader. Whether he’s helping achieve a business dream or seeking compensation for someone who’s been treated unfairly, he draws from a deep well of compassion and experience. He’s a master at devising winning strategies and innovative tactics.

Sometimes the only thing to do is file a lawsuit and fight it out in court. And other times it’s better to negotiate a settlement. Either way, Alan knows how to get the best outcome.

A fifth generation Memphian, he is a voracious reader, semi-avid golfer. The art of political negotiation has always fascinated him. He has been active in local and state politics for more than 22 years. He is former head of the Shelby County Republican Party and currently serves as Special Counsel to the Mayor of Memphis.

He is also the very proud father of 3 children and is devoted to his wife Allison.

Knight of Magisterial Grace: Sovereign Military Hospitaller Order of St. John of Jerusalem, of Rhodes and of Malta (Order of Malta)

Knight: Equestrian Order of the Holy Sepulcher of Jerusalem

Our attorneys have decades of education and experience in employment law. Many other attorneys have barely tiptoed through the books. But since employment law is our focus, we are entirely versed and up-to-date. We are one of the few firms in Memphis and the Mid-South so highly specialized in the field. We are passionate about resolving your workplace disputes and we know the law backwards and forwards.